skip to main | skip to sidebar


...If you spend yourselves in behalf of the hungry
and satisfy the needs of the oppressed,
then your light will rise in the darkness,
and your night will become like the noonday.

Dear friends of One Body One Hope,

Exactly a year ago today, a team of six individuals from the United States was celebrating a late Christmas in Liberia. Packages from sponsor families had just been passed out to the kids at Christ Our Hope, and the mood was festive and light. The sun was shining, the air was warm, and we were relishing the simple joy of being together. Only one thing tarnished the mood: one of the girls at Christ Our Hope was very, very sick. We were in Liberia to be with our friends, but we were also there to find a way to bring Eve home.

Maybe you remember Eve’s story and the unfolding drama of her lingering illness due to caustic ingestion in 2010. Maybe you cried with us when her medical visa was denied, or prayed fervently as we asked God to open another door. Whether you have been thinking about and praying for Eve or not, we are sorry if we have left you wondering what happened in the months after our failed attempt to bring Eve to the US on a medical visa. The truth was, God showed us a way that we could have never anticipated, and as that path required wisdom, diligence, and a level of confidentiality, we had to stop sharing Eve’s story. But that is no longer the case.

On June 27, little Eve Zeambo officially became Eve Baart. And though we weren’t able to travel to bring her home until late November, Eve has been the daughter of our hearts since the day we said “yes” less than a year ago.

Eve has been home with us now for six weeks and she is exceeding our every hope and expectation. She is happy and tenacious and sweet. She loves to cuddle and kiss and tell us how much she loves us--and hear how very much we love her, too. Eve is also passionate, brave, and strong, and we believe it is those characteristics that helped her to overcome so many obstacles.

There are more obstacles yet to face. Eve still suffers from caustic ingestion syndrome, but her medical needs are now being met at a top-notch hospital. Her team of doctors, nurses, and surgeons is dedicated to her health and wellbeing, and we have already experienced the depth of their care and compassion for our little girl. In the beginning of February, Eve will undergo the first of several medical procedures and surgeries that will hopefully restore her damaged esophagus and stomach.

Thank you so much for your prayers, support, and even gifts as we struggled this past year to bring Eve home. We could never have imagined a year ago today that Eve would now be nestled in our arms or rough-housing with her brothers or pirouetting around our kitchen in her pretty skirts. We are so overwhelmed with love for this girl, and gratitude to you for the role that you played in bringing her home. From the bottom of our hearts and forever: thank you.

With love,
The Baart Family

PS - Before we traveled to Liberia to bring Eve home, we designed a book titled "Eve's Story." It outlines her life from birth to the day that she joined our family. But, of course, the last page of the book doesn't say, "The end." Instead, we've written, "The beginning." We believe that it is. 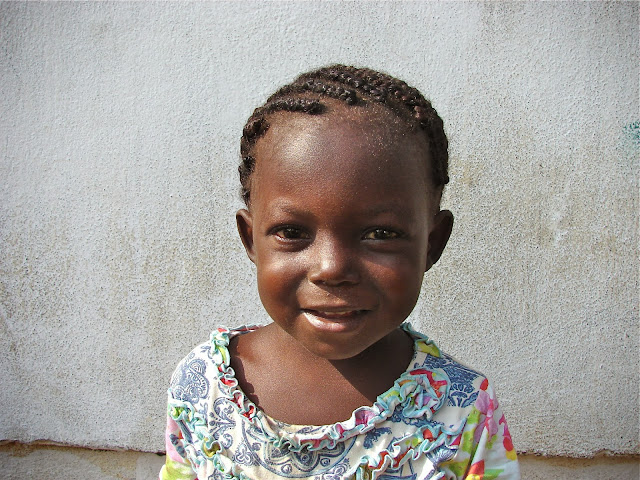 One of the first photos we have of Eve. This was taken in 2010, a couple of months before she swallowed battery acid. 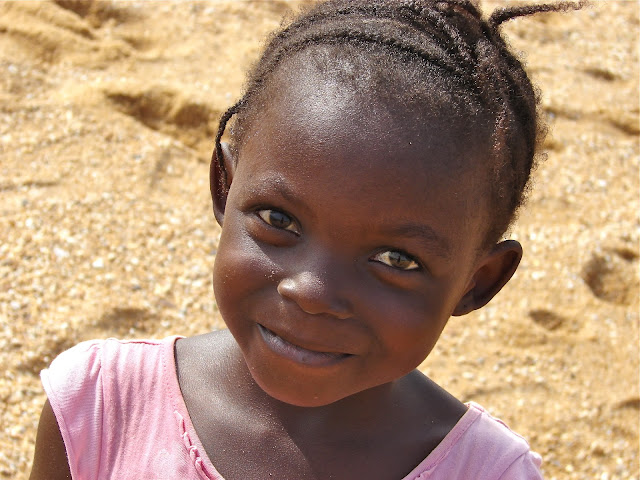 Here is Eve on the beach in January of 2013. That knowing smile on her face is because she believed (we all did) that she would be coming to the US with the team of people from OBOH. As you know, the medical visa failed. 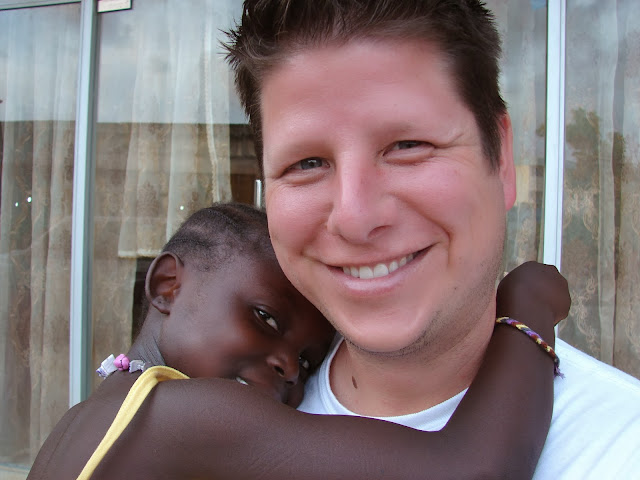 Eve with her daddy only days before we left for home. 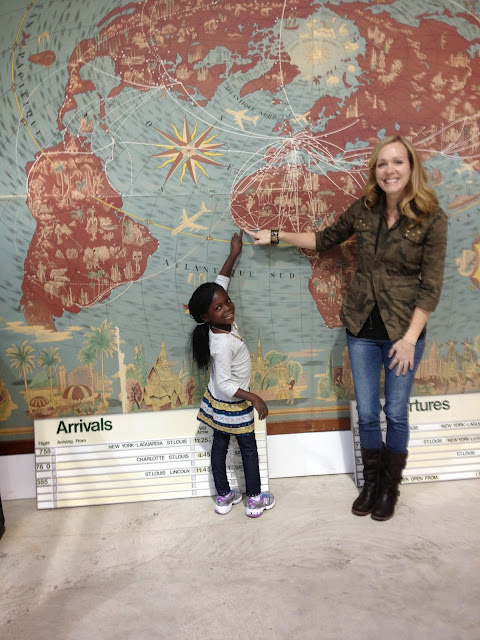 Eve and her mommy in the US, pointing back to where it all began.

As you already know, we bought a farm! We are so excited about this new endeavor and thrilled to report that progress is already underway. Our friends in Harbel have cleared and prepared the “upland” and the “lowland,” and the cultivation of both sites is ongoing. It is their hope to plant rice and vegetables for now, but in order to do so they are in need of both seeds and tools to farm the land. 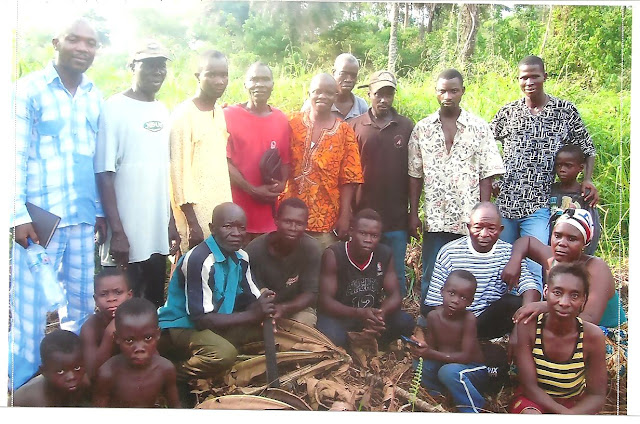 (Here are several of the workers and their families with the land waiting to be cleared behind them.
You'll recognize Emmanuel in the center in a bright orange shirt,
and Abraham, the pastor of the Harbel church third from the left in a yellow shirt.)

Emmanuel shared a wish list with us, and we would like to invite you to participate in this exciting project! As the weather warms Okay, it’s not warming yet, but as our hearts long for spring, we dream about planting our own gardens and watching the trees and fields around us blossom with new life. How appropriate that our brothers and sisters in Liberia are experiencing the same joy and anticipation as they plant their own ground this spring! We may not get to work side by side, but as they work their soil and we till ours, we are participating in the same in-breaking of the kingdom of God in our own communities. This is inspirational, incarnational work, everyone. What a blessing to be a part of it!

We invite you to share with us in this exciting new endeavor. The Harbel church is in need of many supplies, from seeds to wheelbarrows to pinkerlins (don’t ask me what a pinkerlin is, I haven’t got a clue!). Please take a moment to peruse the list and see if there is anything that you would like to contribute to the Harbel farm. Every gift counts! $10 will buy two calculators and $150 will buy rain boots for all the workers. A small gift is just as much of a blessing as a large one.

You may mail your donation to us at:

You may also hand in your donation to any of our OBOH board members (Brent De Jong, Grant De Vries, Julie Bajema, or Aaron and Nicole Baart). Or you may donate online by going to our Facebook page and clicking DONATE. If you would like to earmark your gift for a specific purchase, please do so by writing the item in the memo line of your check or including a note with your donation.

Thank you so much for your support and prayers!

We bought a farm!

Some people buy zoos (did you see that movie?)... We buy farms. Well, we bought one farm. Well, our friends in Liberia bought a farm and we were able to participate in their new ministry enterprise by providing the funding for 8 acres of land near Harbel. Woo-hoo!

As you may remember, One Body One Hope dreams of partnering with all of the sister churches of Abide in the Vine Disciples Church. One of those churches is in Harbel, near the Firestone plantation south of Monrovia. Pastor Abraham is the shepherd of that amazing congregation, and one of their dreams is to become self-sufficient by living off the fertile land that surrounds their village. While we were in-country several weeks ago, four members of our team were able to visit the land and survey the potential in the soil, nearby water sources, etc. The land looks excellent and it's a done deal! The congregation of the Harbel branch of Abide in the Vine Disciples church is now the proud owner of a nice chunk of farmland. Let the plowing begin! 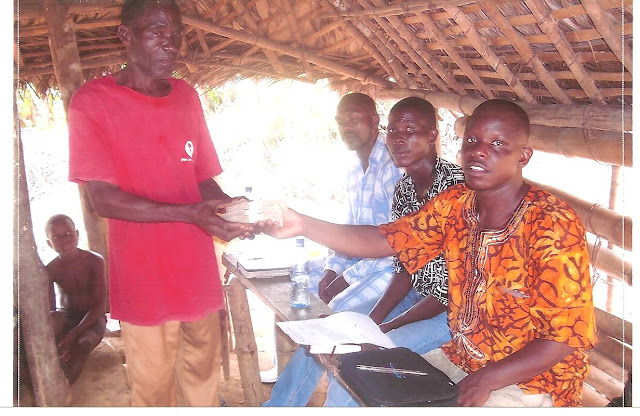 Here Emmanuel (in the orange shirt) is presenting David Bweh, the owner of the land, with the first check. (Also pictured are Emmanuel Sumo, the art teacher at the Vine School System of Christ, and Prince, a friend and member of the church). 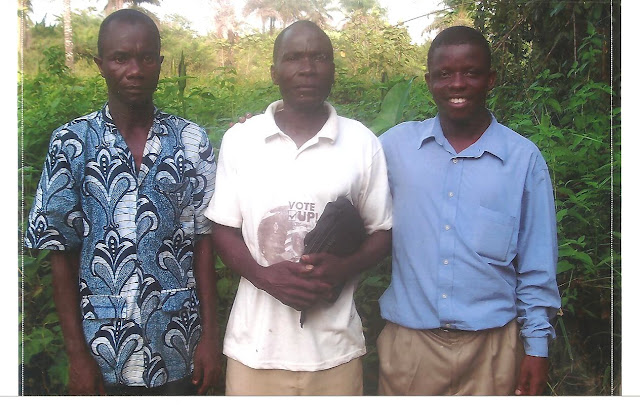 From left to right: Abraham (the pastor of the Harbel church), David Bweh, and Emmanuel.

One Body One Hope is a non-profit organization that works in partnership with a church and orphanage in Monrovia, Liberia. Christ Our Hope is truly a place of hope for orphans who have experienced devastating loss due to bloody civil war, crippling poverty, and unchecked illness and disease. You can help! We invite you to join us in praying for these beautiful people as well as supporting them financially, spiritually, and emotionally while we work alongside them to rebuild their lives and their country.